Spring in my Pillow

Too tired for Match of the Day I took myself to bed; lovely fresh bedding, washed that morning and dried in the sun. Surely my dreams would be filled with thoughts of spring and summer to come. Bluebells starting to bloom, swallows returned, first cuckoo heard …

As I lay down my weary head, the buzzing sound of a honey bee went from laid back to frantic. It sounded very close and angry. I took the pillow to the spare bedroom, emptied it from its case, turned the case inside out, and there was the bee. That could have been a nightmare!

Sue strongly denies any suggestion of retaliation for snoring.
Posted by Unknown No comments:

As we walked in the hills above the railway we stumbled across a Canada Goose, nesting on an island. Totally still, with neck and head laid low to the ground. Even when I walked around to the side, it didn't move or change its gaze. Good protection from hungry foxes. 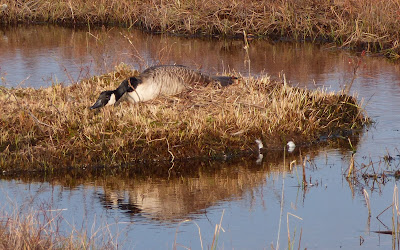 For an Italian themed dinner with neighbours Ann prepared canapés, I did carpaccio, Ian rolled meatballs, Marie served cheesecake with flutes of Amaretto and Ann topped it off with petit fours. The food, the setting and the company were excellent, but one story stood head and shoulders above the rest. Or should I say hand and arm?

One of our neighbours is Denis, retired from the London fire service and well used to emergencies. At this time of year, the field in front of his house is busy; lambs racing around, weary ewes trying to get a break and pregnant ones keen to get on with it. Most manage an unaided natural birth, but some need the ministrations of a shepherd.

As Denis admires the view, he sees that one is lying on its side, with wriggling legs, up in the air!

Denis had seen the farmer at work and knew roughly what to do. Rolling up his sleeves he inserted his right hand, but that hand was too sore for any serious probing. So he took off his watch and tried the left hand. Somewhere inside should be some legs or something else to pull out, but it was beyond his reach.

Professional help was needed and eventually the farmer at the far end of our lane was contacted and, picking up his bottle of fairy liquid, agreed to come and assist. On arrival he looked at the ewe with her legs in the air and asked the would-be rescuer if he’d been fired from the fire service? Did he always stick his hands up anyone who called for help?

‘That sheep’s not pregnant, it’s fallen over and can’t get up.’ He grabbed the sheep by its wool, rolled it onto its feet and off it ran.

Each time he walks down the lane our good Samaritan neighbour gets a strange look from this ewe. I like to think I would have been as willing to ‘lend a hand’ and not just walk on by. If nothing else, I am sure that within a couple of weeks, the story will have brought a smile to hundreds of shepherds across North Wales. 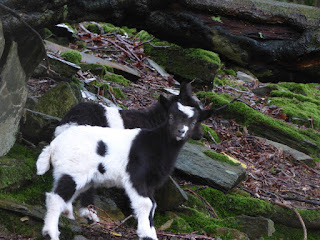 Four weeks ago (5th March) the baby goat in the background was born and has been wandering around the bottom hairpin with its mum.

The good news is that it's now got a playmate - not sure where this one came from. Neither of the mums were supervising, at least not in my sight.

A couple of times in recent weeks I have seen a second female on the other side of the fence, on the inside of the nature reserve. Maybe that was the other mother and this young one has now made its way through that fence.