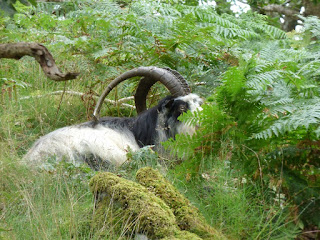 When a billy goat is knocked off his perch, there’s no hanging around, demanding a recount, and clinging on to the vestiges of power. We met this sad old fellow lying in the bracken beneath the trees and he watched us for about half an hour as we cooked up some soup on the primus.

Was he injured? Did he need help and rescuing?

After lunch I walked down and got to within 2 or 3 metres before he pulled himself to his feet and slowly strolled away. There was no apparent injury other than to his pride. I’ve seen ousted billies before and they go all listless with no purpose in life; there’s no dating agency for old billies looking for a companion.


Some years ago the billy that was ousted from our gang of goats got a new lease of life, taking up residence on the fire escape of Plas Dol y Moch, the outdoor education centre for children from Coventry. For a brief while the old billy was blessed with a plentiful supply of sweets before the wardens ushered him up the mountain.

Peacock caterpillar - is it late? 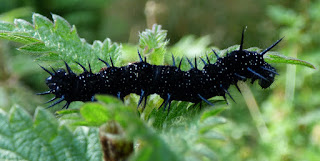 Yesterday I saw my first black caterpillar of the year, the one that feeds on nettle leaves, and eventually becomes the Peacock. It's the same butterfly that sunbathes in our windowsills and can be seen flapping around in the middle of winter.

When I saw the caterpillars I thought they were a bit late in the season and checked back; sure enough, in 2011 I had seen them on the 7th of May. Summer has been poor, but surely not that bad?

I've had a look at the Butterfly Conservation website which says that in a good year they may have a second brood. Presumably that's what has happened and I have been imagining all this cold, damp weather.

'This butterfly is generally single-brooded. However, in good years, a small second brood may appear. Adults may be seen at any time of the year, with warm weather waking them from hibernation. The majority emerge from hibernation at the end of March and beginning of April. These mate and ultimately give rise to the next generation that emerges at the end of July.'
Posted by Unknown No comments:

On August 3rd, 1955, the Ffestiniog Railway's Prince hauled its first passenger train of the restoration era, comprising carriages 23 (now in regular use on the Welsh Highland Railway) and 12. It entered regular passenger service two days later. To mark the 60th anniversary of this landmark in steam preservation, the 152 year-old loco (complete with flags) double headed the 1010 from Porthmadog. Here he is passing Campbell's Platform.

Bilberries - so much better than Ribena 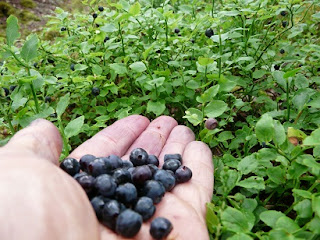 Ribena’s been in the news this week. Like many people I naïvely thought it was vaguely healthy, just pressed blackcurrants in a bottle, but it’s about to be banned by Tesco as a sugar-laced contributor to obesity.

If you’re looking for a weight watcher’s alternative I can recommend picking bilberries which are in season now and will continue until late August depending upon the weather. By the time you’ve picked them you’ll have lost more calories than you might gain.

It takes about half an hour to get a cupful. Using a ‘bilberry comb’, sweeping through the tops of the bushes, is much faster but less therapeutic and collects a lot of unwanted leaves and twigs.

Last night’s dessert was Greek style yogurt with bilberries and we’ll have some with our breakfast cereals; purple milk is such a colourful start to the day.
Posted by Unknown No comments: